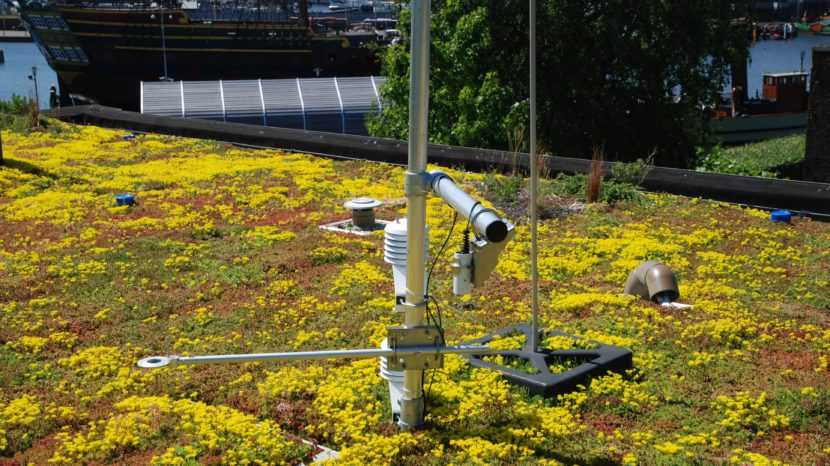 Cool head and dry feet thanks to blue-green roof

The blue-green roof of Marineterrein Amsterdam – Smart Roof 2.0 – has been the test site for scientific research in the last two years. This roof stores rainwater and reuses it for the vegetation on the roof. Dozens of sensors regulate water management and measure exactly how much the plants evaporate. The results of the research were recently announced. It has been found that the blue-green roof on hot summer days can offer much more cooling than a ‘normal’ green roof. The difference with a black bitumen roof even rises to 40 ° C in the summer.

View the summary of the results of the study here.

Project Smart Roof 2.0 is an innovation project of the municipality of Amsterdam, Waternet, Drain Products, Aedes Real Estate, KWR and Marineterrein Amsterdam led by TKI * Water Technology. Together they have investigated how the transition from black to blue-green roofs can contribute to a livable city that is resistant to climate change. It is getting busier, fuller and also warmer in cities. Blue-green roofs are part of the solution; hot black roofs in the city are replaced by multifunctional cool, green oases. The evaporation of these roofs cools the city.

More cooling and collection of rainwater

The traditional green roof evaporated 18 liters of water per m² during a dry two-week period in 2017. The blue-green system evaporated 42 liters of water per m² during the same period. This not only ensures more cooling, but also less rainwater that ends up in the sewer. The blue-green roof is also much more efficient with energy: over a period of years such a roof converts an average of almost 50 percent more solar energy into water evaporation instead of air-heating than the ordinary green roofs. Another striking result is the temperature difference between the surface of an ordinary black roof and an overgrown blue-green roof. That difference increases to 40 ° C on summer days. That saves a lot of extra heat in the city.

Furthermore, 42 different types of insects were found on the new roof in just 24 hours, with a remarkably high number of flying insects and a lively population of several species of spiders. There was even a rare species of parasitic wasp found.
Conclusion: roofs are no longer just the top of a building, but they can play an important role in making buildings more energy-efficient, the city’s rainwater management and dampening the urban heat island effect**. For example, roofs can have a positive effect on people, health and biodiversity.

**The urban heat island effect is the phenomenon that the temperature in a city is on average higher than in the surrounding rural area. This is mainly because the heat of the sun is better stored in dark materials. They are much more common in a city – such as asphalt and stones. In addition, the wind speed in the city is relatively low.

Price of the Delta Commissioner

Smart Roof 2.0 was put in the spotlight during the 2018 National Delta Congress. Project leader Sacha Stolp received a great prize from Delta Commissioner Wim Kuijken. Kuijken praised the innovative roof as ‘a powerful combination of science, innovation and very practical solutions for a major problem.’

Amsterdam has considerable ambitions in the area of sustainable building and entrepreneurship. Marineterrein Amsterdam serves as a test area where solutions are conceived, tested and applied for urban issues in the areas of water, health, housing, learning and traffic. The municipality of Amsterdam hunts circular innovations on the Marineterrein and is always looking for ways to make the public space in the city future-proof and sustainable.

Project Smartroof 2.0 is partly paid with money from the Top Consortia for Knowledge and Innovation (TKIs) of the Ministry of Economic Affairs and Climate. In the TKI Top Sector Water Program, industry, governments and stakeholders work together on the research and demonstration roof project Smart Roof 2.0.