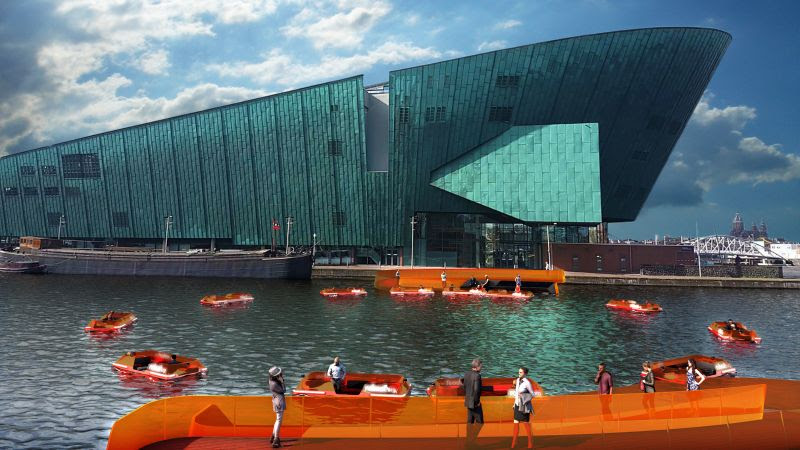 roundAround: an autonomous ‘bridge’ over the water

As Amsterdam is growing it is an increasingly difficult challenge to connect different parts of the city. Especially if these parts are separated by a busy waterway. AMS Institute, one of the organizations on the Marineterrein, is now coming up with a possible solution in collaboration with MIT: roundAround, autonomous boats that form a “bridge” over the water.

A walk from NEMO Science Museum to Marineterrein Amsterdam takes about ten minutes, while the two places are separated by a waterway that is roughly 80 meters wide. A bridge to connect both ends could considerably shorten the travel time, but proves to be difficult to realize because large ships need to be able to pass by. roundAround could be the ideal solution for this problem.

A solution comes in the form of ‘Roboats’, which are equipped with cameras and Lidar technology that continuously scan and evaluate the environment. Thanks to artificial intelligence, the autonomous Roboats learn from their environment and traffic on the water, and become smarter over time. In this way it is possible to safely transport hundreds of people per hour. Without skipper.

The Roboats sail in a circle from one side of the water to the other. At the water’s edge, they are led by a rail to a platform where passengers can board. In the meantime, the battery is being charged while the boat is stationary.

The idea for roundAround is intended to start a discussion about alternative forms of transport. After all, a dynamic form of transport such as roundAround is cheaper and faster to realize than a permanent solution such as a bridge. By using the water as a living lab, we can experiment with new forms of transport and learn from the results. This fits in seamlessly with Marineterrein Amsterdam Living Lab, where solutions for urban challenges are devised, tested and applied.