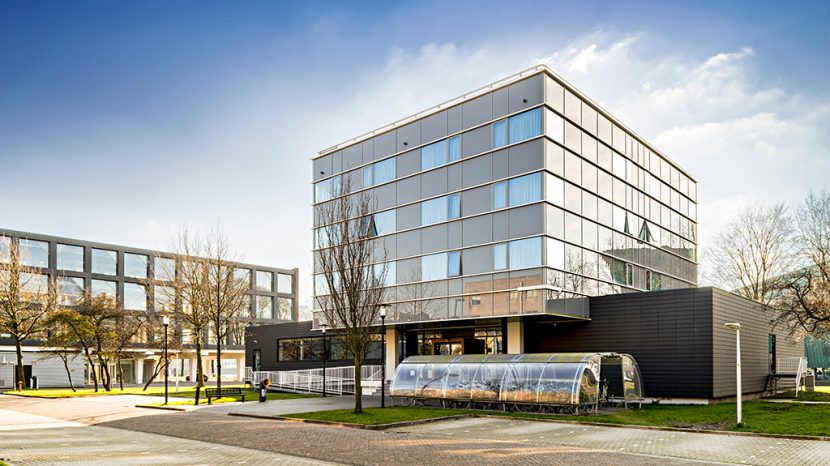 The former officers’ quarters on Marineterrein Amsterdam will become available for a new tenant in November 2016.

The former officers’ quarters (building 025 on the map) measure 1850 m2 and are located along Oosterdokskade quay. The building offers superb views of the Oosterdok and is within walking distance of Amsterdam Centraal railway station. In 2011, the interior and exterior were completely renovated by the Dutch Ministry of Defence. While the aim of renovations was not to produce the trendiest result, the building has a high-quality finish and is immediately available. The building also has a large downstairs recreational area – the All Ranks Bar. It also features conference rooms, changing rooms, and a cellar. The rooms can be connected to each other via sliding partitions. The three upper levels have 28 single rooms and four suites with kitchens.

De Gouden Bal
Building 025 was originally used as officers’ quarters. In 2011, it was renamed ‘De Gouden Bal’ (‘the golden ball’) and made accessible to all ranks. In August 2016, the Dutch Ministry of Defence is handing this building over to Bureau Marineterrein Amsterdam.  A call for Proposals has been issued in order to decide the new purpose of the building. Building 025 is especially suited for entrepreneurs, researchers, and creative minds who are looking for short-term premises and are eager to get together for inspiration and focus. In particular, we are looking for a trendsetting and innovative tenant who fits with the character of the site and the developments taking place there. The candidate with the best plan, in the opinion of the jury, will be offered a five-year lease contract. The deadline for submitting applications is 16 August 2016.  You can use the submission form to plan a viewing of the building. Viewings are scheduled to take place on 26 July and 9 August.

Download the call for proposals and all information here

Marineterrein Amsterdam: a sustainable city quarter
Marineterrein Amsterdam wants to differentiate itself by offering a space in the middle of Amsterdam where it is possible to work in a focused manner. It is creating a green and international environment in which people can concentrate on developing solutions for a sustainable society. Those who come to work at Marineterrein are doing their bit to foster the development of a flexible and sustainable city quarter. Marineterrein is currently home to some thirty organizations, including IJsfontein, VRBase, Amsterdam Smart City, Alliander DGO, The App Academy, Growth Tribe, Makerversity, and Nine Connections. It also has two restaurants, a hotel, and its own brewery. The ‘Commandantswoning’ (‘the commander’s quarters’) can be used for special events such as dinners and presentations.