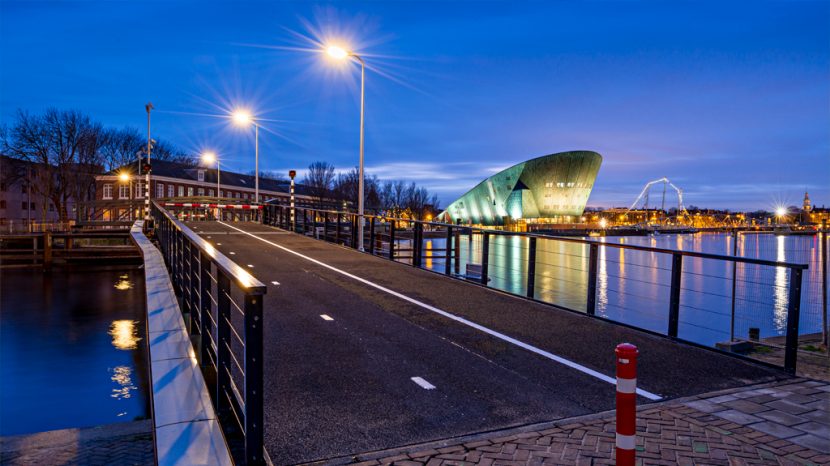 On 11 January 2016, the Mayor of Amsterdam Eberhard van der Laan and the Dutch Minister for Housing Stef Blok will open the new bridge to the Marineterrein Amsterdam as well as the renovated 027E building. This occasion marks the point at which the station area, the Marineterrein, and Kattenburg island are all directly linked to one another, as well as seeing an area of the Marineterrein becoming publicly accessible.

Last year, the gateway of the Marineterrein was opened to the public, freeing up buildings for use by innovative organisations. Twenty companies have now set up business on the historic Voorwerf. Pension Homeland hotel has taken over the former Long Room. These developments mean Marineterrein is gradually becoming a meaningful spot in the city.

A second part of the Marineterrein is now open to the public. One of the buildings in the area is the former education building of the Ministry of Defence. The building has been completely renovated. One of the first leaseholders of the building is Makerversity, a community of professionals who are at the cutting-edge of technology, creative design, and business. The organization also helps young people by training them in hands-on careers.

Direct route for cyclists and pedestrians

The new bridge will directly connect the new publicly accessible area of the Marineterrein to the head of Dijksgracht street. This moveable bridge offers cyclists and pedestrians a quicker route between the station area and Kattenburg island, and also improves the accessibility of the Marineterrein. However, the bridge is only temporary, as the Marineterrein is still being developed. Now, the developers are looking at the most suitable final position for a cyclist and pedestrian bridge.